It's been extremely busy for me the past few months. I know I say that a lot and in general that's the way life is when you work with large numbers of people. The quarantines and lockdowns made it very difficult as I had to migrate away from face to face in person onsite classes to a fully online system. I've managed to handle it okay but the demands on my time have actually increased as a result. So I do the best I can as far as managing it all.

Although I enjoy what I do my personal creative time has been compromised even more as I attend to helping artists develop their work. I have a chance here and there to get into my own art but it's rare. Things will change someday but for now I have to deal with what's in front of me at any given moment.

One area where I'm able to do a little drawing is in archiving the large volume of class demonstrations I've created over the past few years. Most of these demos are in blue pencil which smears easily and is not water resistant. So I'm going over these drawings with black line to make the images permanent. I then format the composition into a little mini lesson so others can gain something of it through my social media presence.

Here's a sample of what I'm doing. I hope you find these helpful. 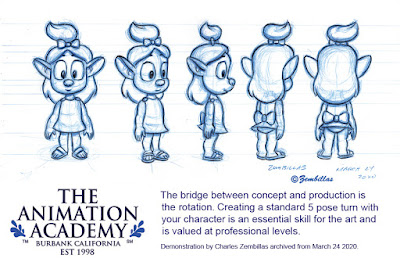 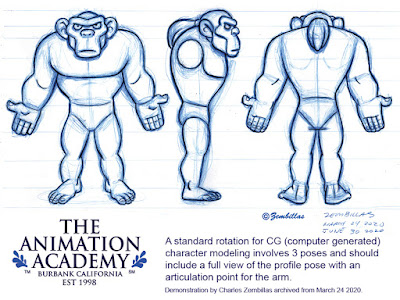 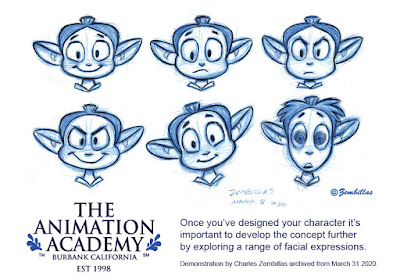 Crash Bandicoot 4 will be a big hit! How well will it do?

Word is that "Crash Bandicoot 4: It's About Time" may be the most successful video game of the year. We'll see! Meanwhile...

A producer from Toys For Bob which is the studio producing the upcoming Crash 4 narrates this video where the nature and details of the game are described. This video is published by PlayStation on YouTube from Aug 6. It's had nearly 1.4 million views since.

Besides Crash and Neo Cortex which I worked to create with Joe Pearson following his lead the other characters in the video I originally designed include Coco Bandicoot, Aku Aku, N Tropy, N Gin, and Dingodile.

The production quality of the game is outstanding as can clearly be seen in the video. Release date is October 2 2020.

I'm sure everyone's aware of this by now. The latest Crash game is on the way! This coming Oct 2 2020. The trailer is spectacular. Several of my original characters. Sharing the glory with Joe Pearson. We were colleagues in the development of what's become a classic franchise. Joe was the genius between us. Congrats to all involved with what appears to be something of a video game  masterpiece. Terrific production. Bold and vibrant design. Looks like a lot of fun. Excited for its success! Good wishes to all.

There's a remarkable story behind this graphic.

I started working on it years ago in August 2009. Came up with the concept of the eagle but couldn't quite figure how to put a finish to the overall composition. Then recently I did a search for an American flag design and found one that fit absolutely perfect with what I had done with the eagle. The curve of the flag and the eagle were identical. All I had to do was place the eagle image within the flag. It was miraculous I tell ya! Couldn't believe what I was seeing. Guess it was meant to be!

Thus my creative homage to my country this Independence Day in the USA July 4 2020. 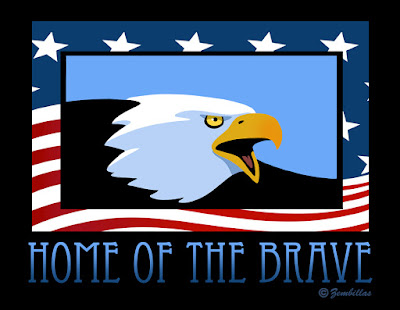 He's tired of it too! 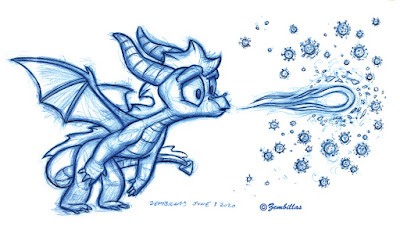 Hello there friends !! I hope this finds you well. Things have been tough lately and as such I apologize for the long delay in attending to my blog. A lot of changes happening plus I really needed a break. Glad to report things are coming back to life.

So let's celebrate with a new Crash Bandicoot sketch! I did this about a month ago in hopes the virus stuff would soon go away. Crash is doing what he can to make things better.

A big thanks to everyone who continues to follow my blog. You're wonderful people and I wish you good health and happiness !! 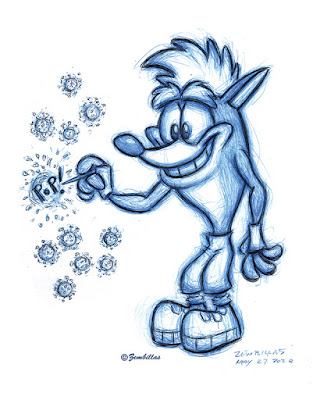 Greetings to you wonderful people who follow my blog. Thank you as it has been my privilege to have your attention. I hope you're all doing well and staying healthy during these challenging times. You and your loved ones. I've been very busy since the year turned. As with everything else the changes taking place have affected what I do as well. With the adjustments I'm making I feel they are positive ones that will lead to an improved way of doing things.

In the meantime here's a little message from Crash and Spyro as they team up to offer a word of encouragement. Stay strong friends! This will not last forever. It will pass. There are better days ahead that we can look forward to! 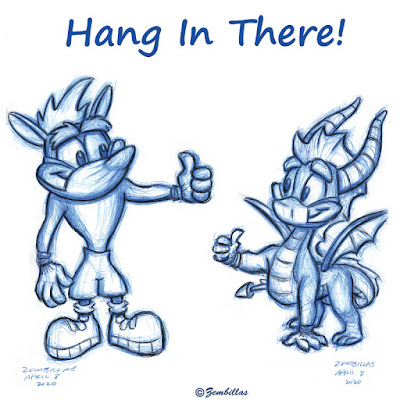 My school The Animation Academy is 22 years old

Thought I'd share this milestone with all you great folks. It was on this evening in 1998 at this very hour in the back room of the Coral Cafe in Burbank California that The Animation Academy held its first session. We had a sold out class of 20 students.
The Academy has been a major influence in the animation industry in that time. We continue to have a positive impact in many ways. Especially in people's lives.
Celebrating 2 decades and 2 years of great experiences! 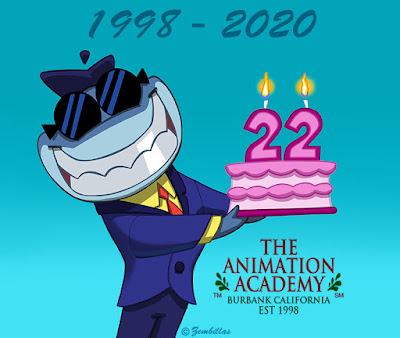 Email ThisBlogThis!Share to TwitterShare to FacebookShare to Pinterest
Labels: ArtShark, The Animation Academy

20 Years to the Day - The Beginning of Jak and Daxter

A few days ago I realized something. That in early January 2000 I signed the contract to begin work on a project that would become Jak and Daxter. I searched my files and found the contract. The date was January 5.

So this is it friends! It was 20 years ago on this day I signed the deal to get started on "Project Y". The rest as they say is video game history. This is a graphic I created in honor of the occasion. I plan on featuring a lot of the unseen art throughout the year. 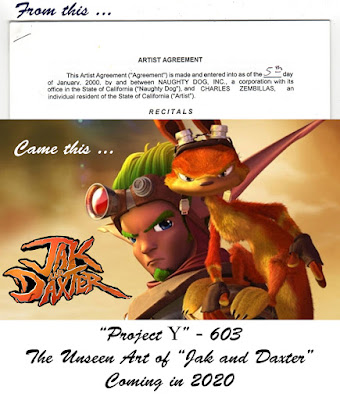 Email ThisBlogThis!Share to TwitterShare to FacebookShare to Pinterest
Labels: Jak and Daxter

A greeting from our long time representative at my school in Burbank. Have a great New Year and New Decade! Wishing you the very best in all the days ahead! 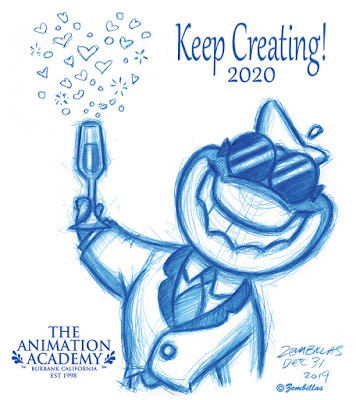