I like drawing creatures and I especially enjoy drawing werewolves. The other day in the Visual Development class I had a chance to work on a demonstration while students were doing their assignments. The idea was to focus on textures and rendering techniques as well as the concept.

Here's a 3 stage sampling of the demo. First we start with a sketch using good ol' Col-erase blue pencil... 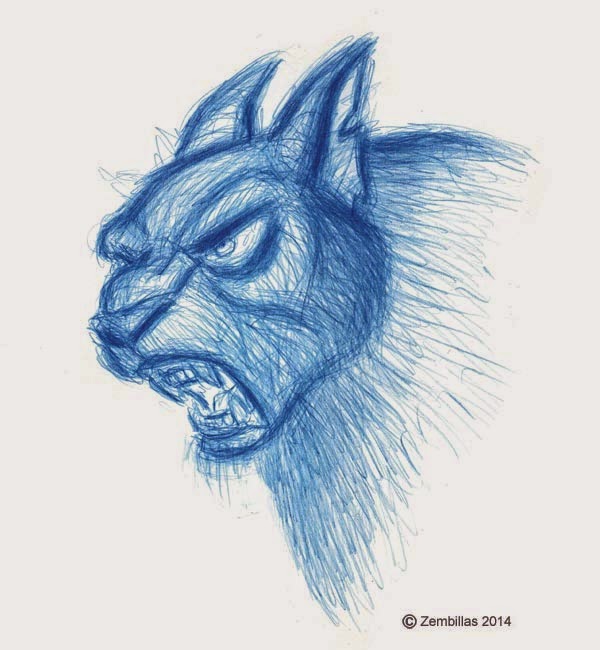 Then we progress by building up the darker tones and line through the use of a graphite pencil... 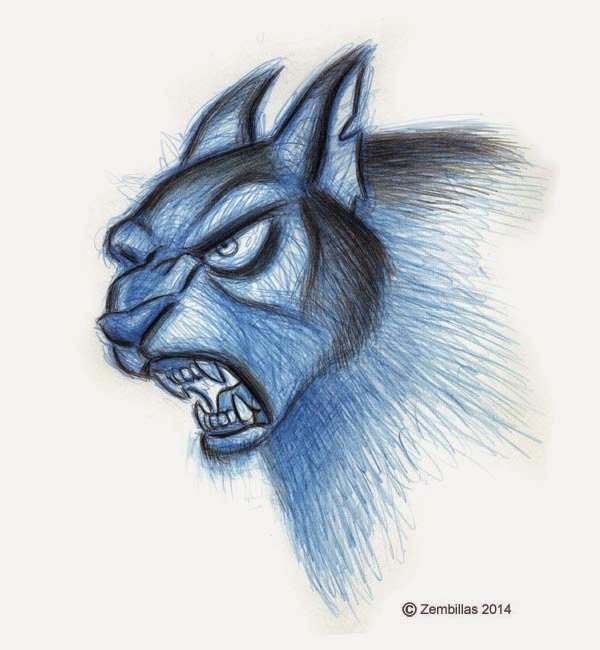 Lastly we top it off with fine point black line pen to further bolster darks and linework giving the composition a finished touch... 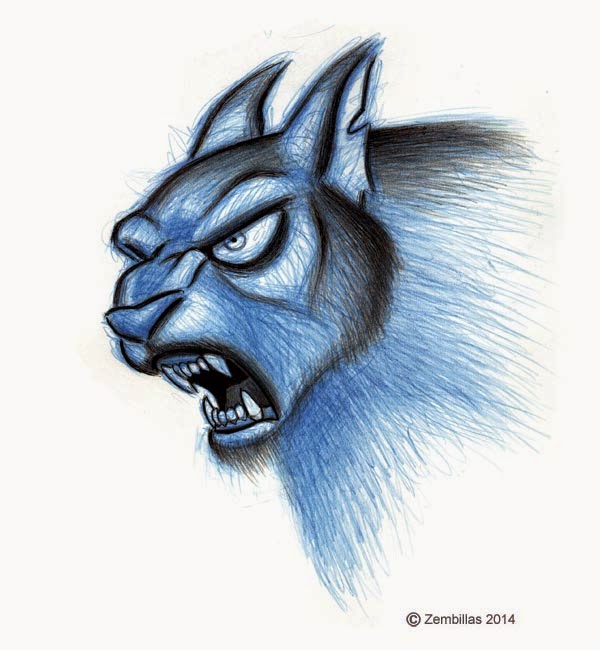 If you're working the image comprehensively then you should be able to stop at just about anywhere in the creative process and still give it a feeling of completion. That's the lesson for today! Thanks for checking in.
Posted by Charles Z at 12:10 AM 2 comments:

The Past is Prolog - Chapter Twelve

Thank you for your patience. I intended on getting this chapter ready some time ago but my schedule kept me from finishing it. This is new material since I've colored and posted everything that was created for this story from back in the 1980s. Chapter 12 is in rough form. It will take too long to color so I hope you won't mind seeing it in line and sketch.

I may change some of the dialogue before finalizing it. In the meantime I hope you enjoy the latest installment for what it is. 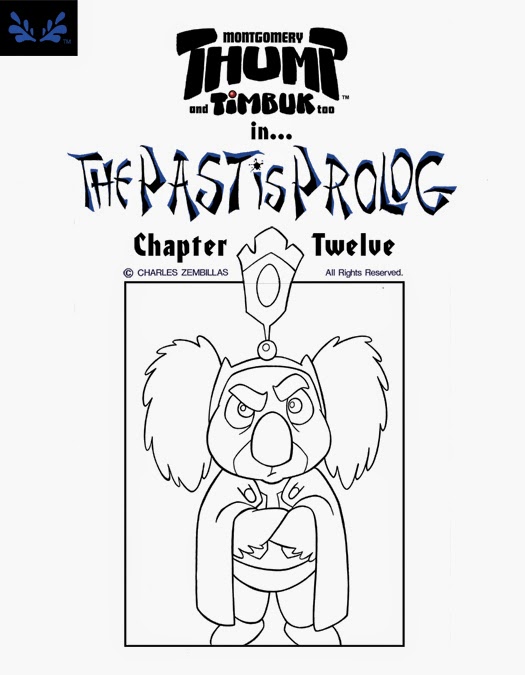 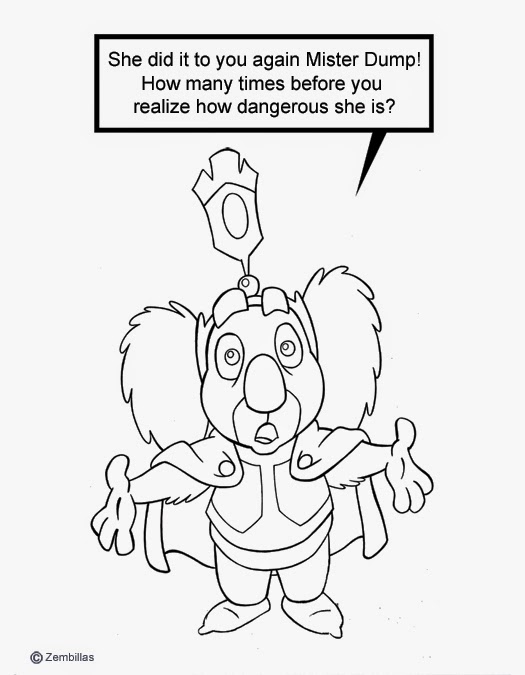 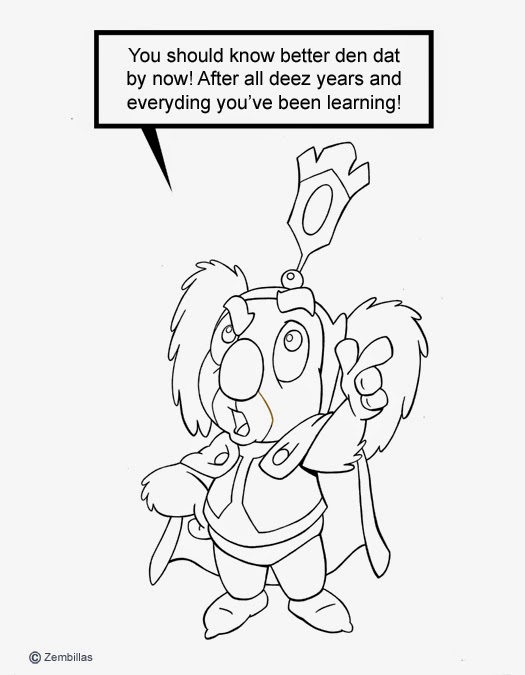 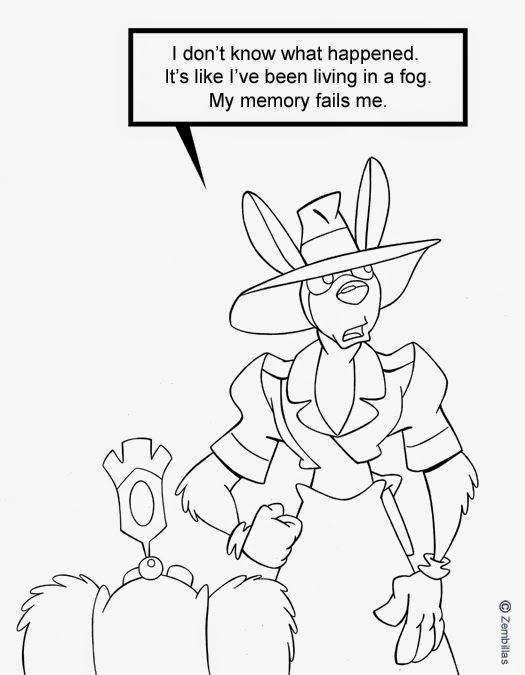 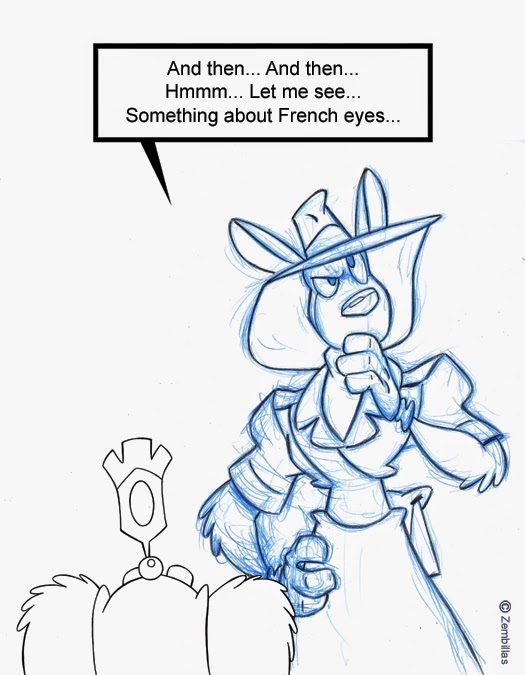 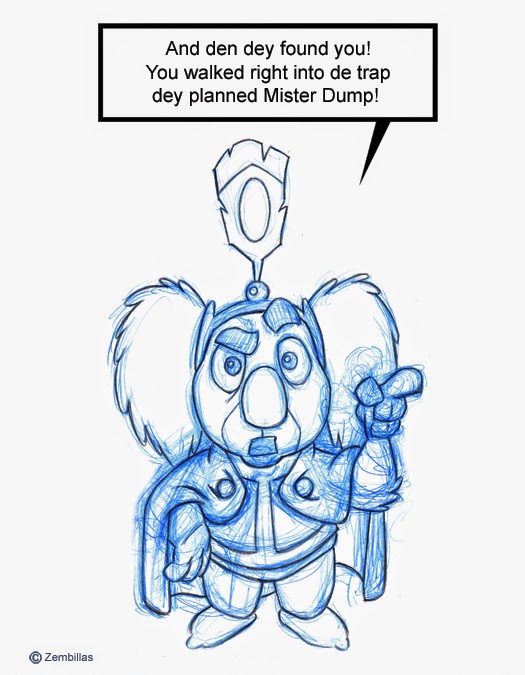 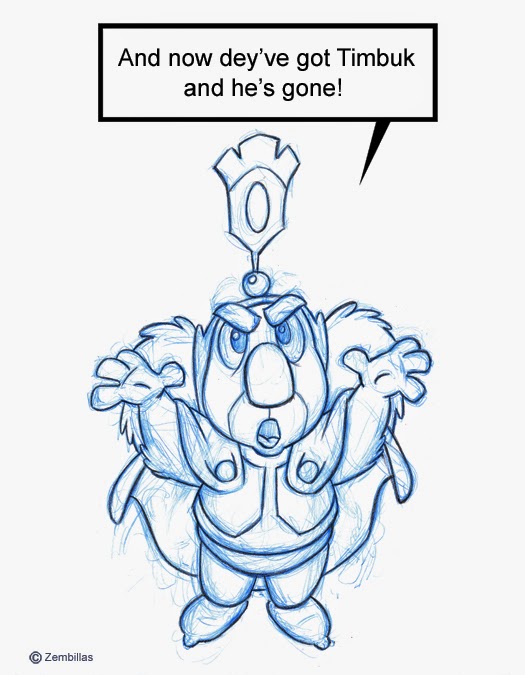 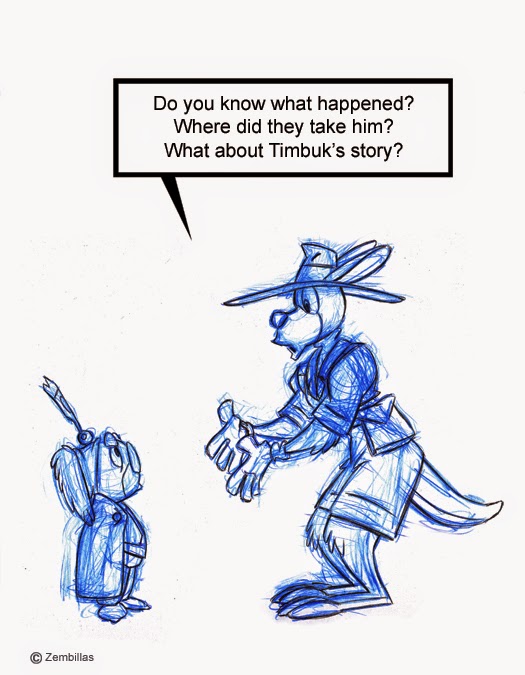 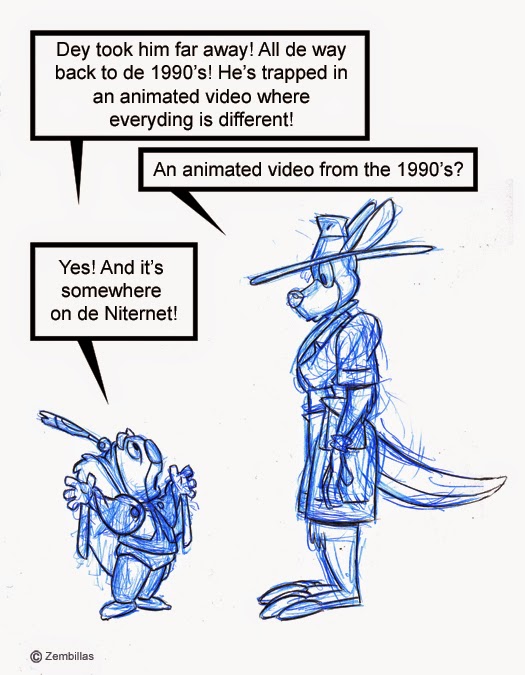 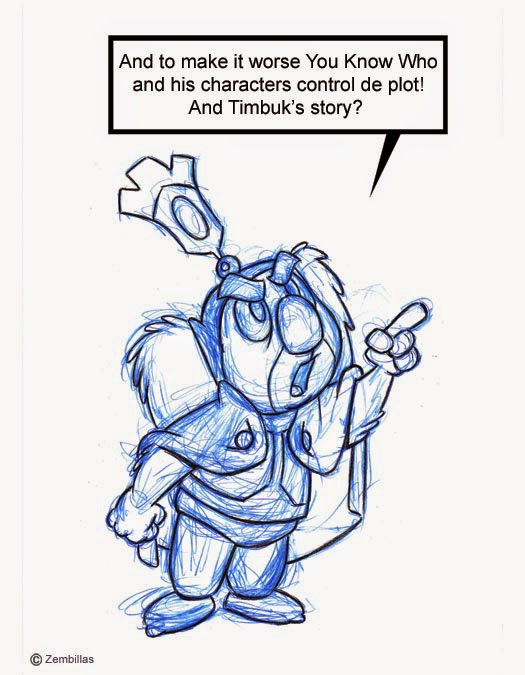 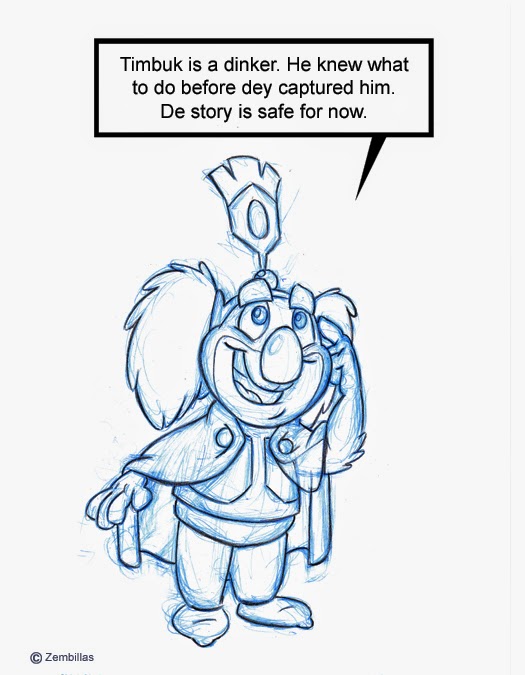 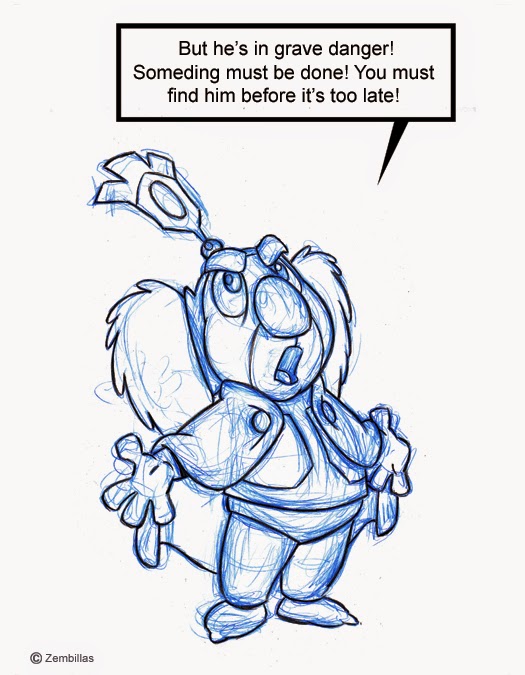 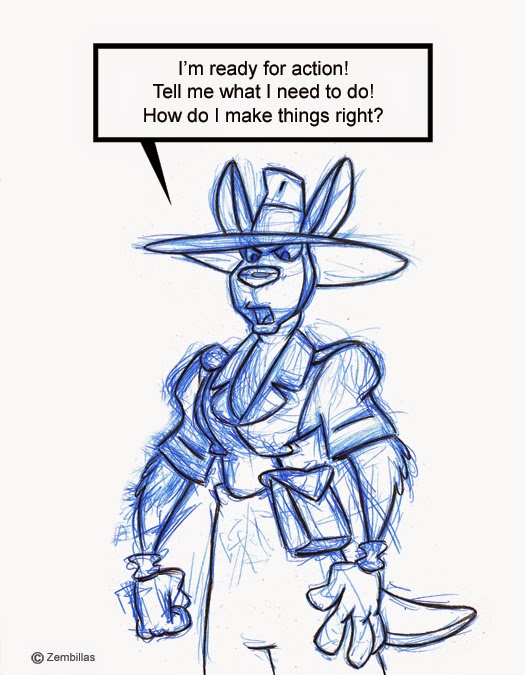 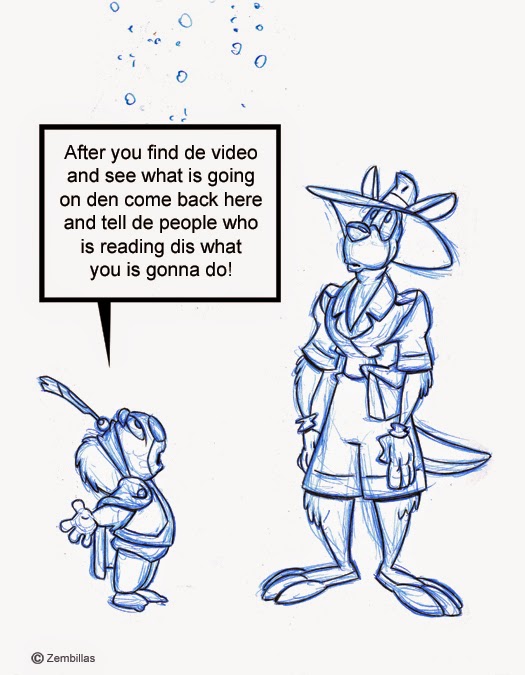 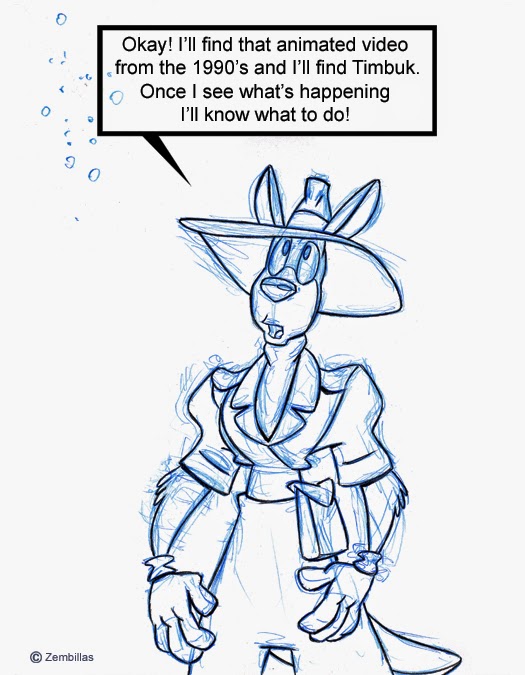 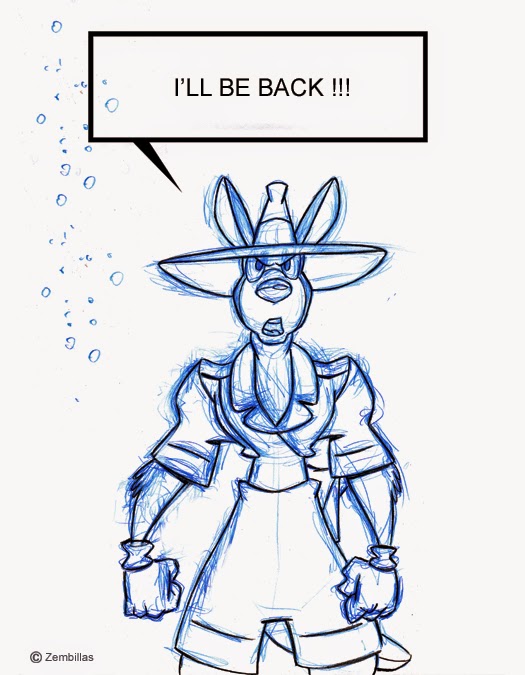 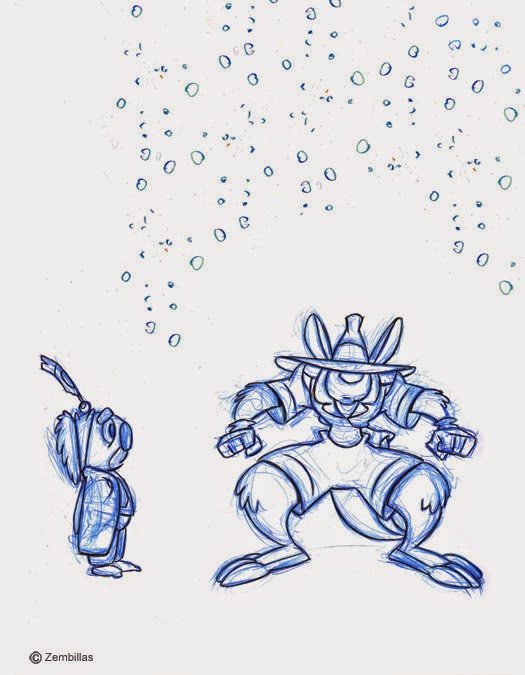 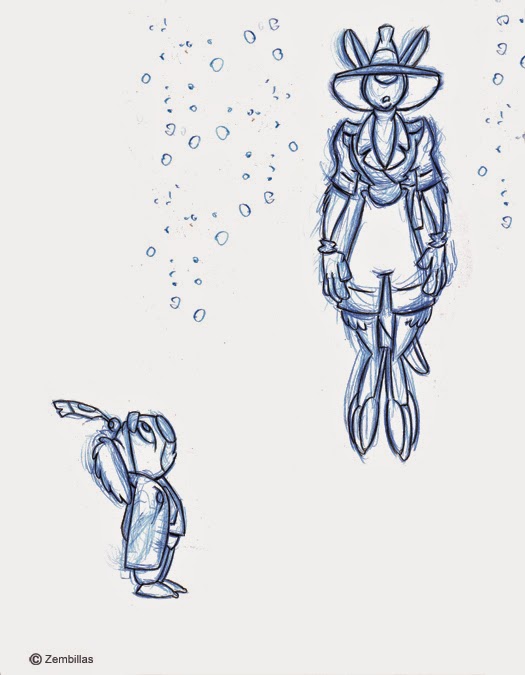 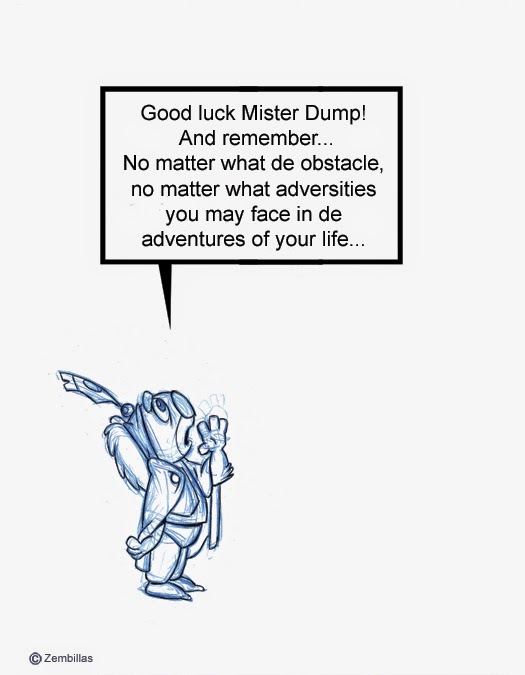 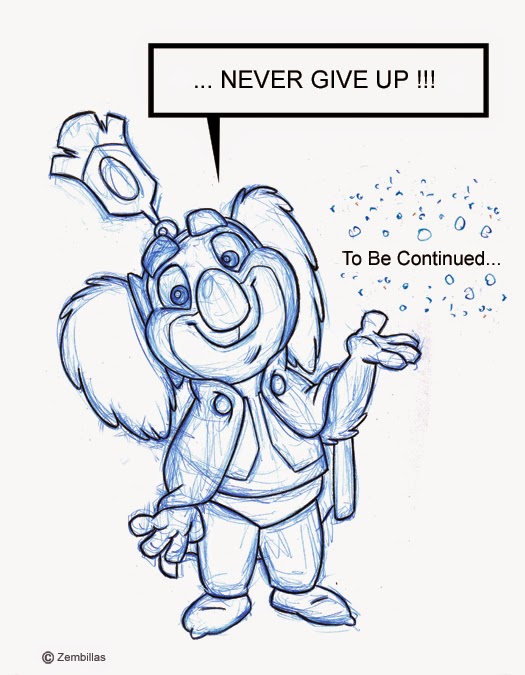 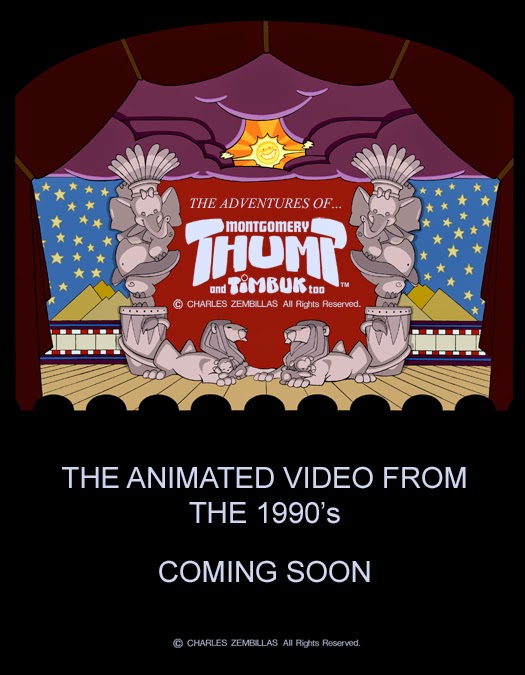 Hey there everyone! Thanks for continuing to visit my blog while I take some time to prepare new material.

This is some art from early in the development of a personal project I was creating called "Montgomery Thump and Timbuk too." It's from way back in the summer of 1985. Living in Burbank and having a great time. I'd open the door to my apartment and friends would hang out and party while I painted. I was coming up with some ambitious stuff in those days. This was one of several works I came up with that would get lots of attention in animation and heavily influence the creative course of the industry.

The original is painted in acrylics. Did it by hand the traditional way before the advent of Photoshop or the existence of any digital illustration software. It's painted on heavy duty watercolor board and is large. About a meter in length. These images are scanned from letter sized color copies. 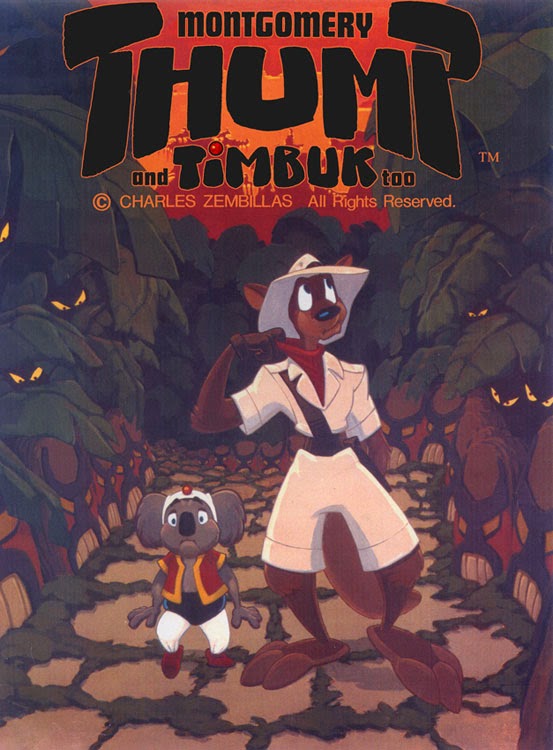 Here it is in its original form without the Thump logo... 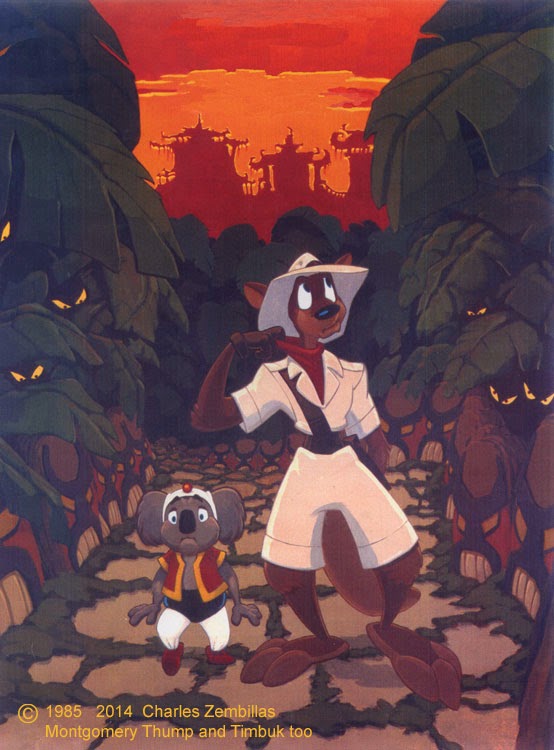 This is for the Crash Bandicoot fans out there. Here's some inside info on what was in my portfolio when I was invited to meet with a couple of new guys in town who called themselves Naughty Dog. When I met them in December 1994 at Universal Studios in Hollywood, what do you think was in my book?

Take a look at the original Crash game. See any similarities in the feel, ambiance, and even a character whose face is lining the pathway?

I knew what was happening as the direction I got for Willy the Wombat was most certainly influenced by my project. I went along as I had been used to it virtually every time it was presented. Montgomery Thump impacted all who had seen it and were aware of it back then. It was a trailblazing property throughout the 1980s and beyond. Among the best kept secrets in animation from that period in time.

You can catch up on the story by following the chapters I've posted below so far. More content on the way.

Thanks very much for checking in.
Posted by Charles Z at 3:54 AM 8 comments:

While we're waiting - Some class demos

Getting some new pages prepped for the next chapter of the Montgomery Thump story I've been featuring lately. Why not take advantage of this window to show some recent images I've created while helping out students in the Character Design 1 class at my school The Animation Academy in Burbank, California.

This was a head rotation demo I did as an exercise in developing strong production skills. I asked the class for an idea and they came up with a little girl in the 1960s. I asked them how long they thought it would take for me to complete a standard 5 pose rotation. One student guessed 45 minutes. This as as far as I got in 43 minutes while being interrupted three times to help some of them with their own assignments. 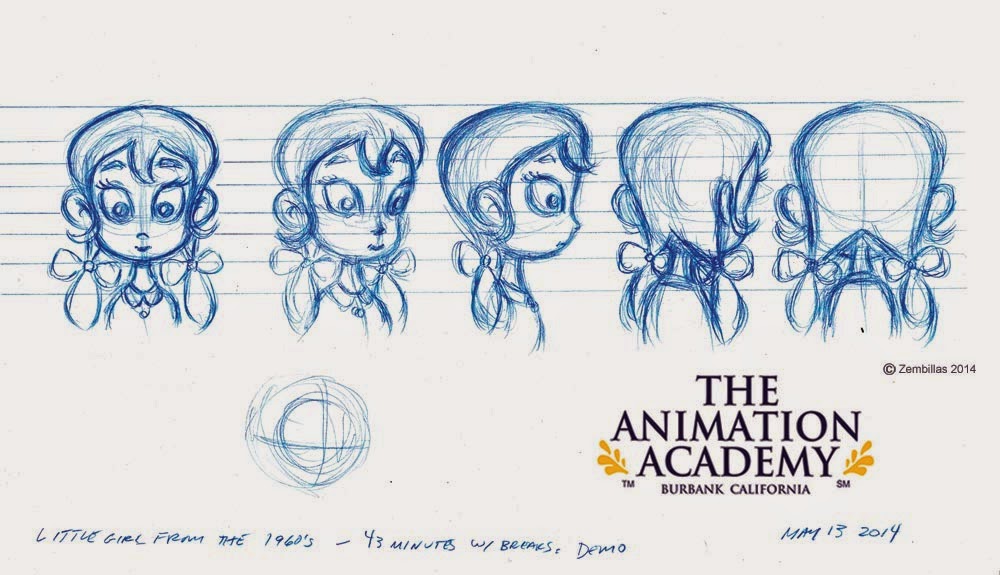 A couple of days later another student was having trouble visualizing their character in a dimensional rotation. So I took it upon myself to show her how a very simple graphic character can be pivoted to describe form. 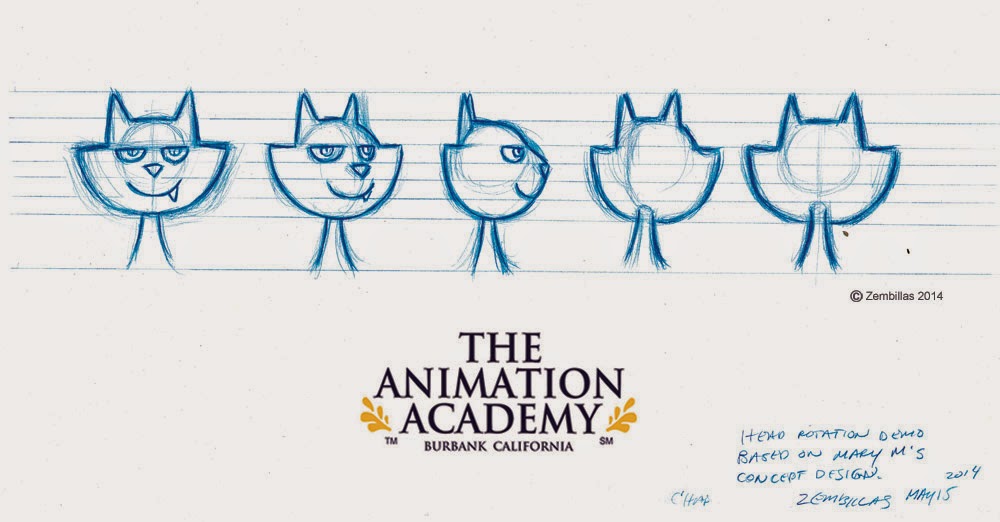 This past week I drew for students in helping them understand how character concept design is approached. Here's a few samples of what I came up with along a single simplified theme. 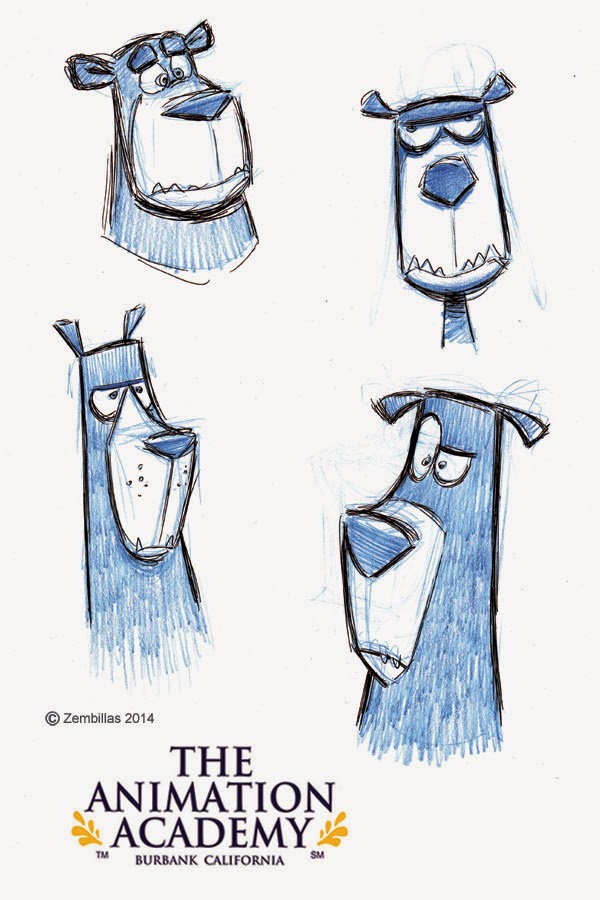 Always enjoy the opportunity of creating while in the company of artists who are willing to learn and looking to have fun in an educational environment.
Posted by Charles Z at 8:00 AM 4 comments:

Thanks everyone for following the story I've been featuring on the blog the past couple of months. Great fun on my end. Hope you've enjoyed it so far. Something different.

As it happens I've been so busy with my school lately that it's encroached upon the time I need to prepare follow up content. All the material I created in my first swing through the story of Montgomery Thump and Timbuk too in "The Past is Prolog" has been published and it's taking a little while to get the new stuff ready. I'll have it up soon. In the meantime a dedicated site for the project is getting closer to launch and I'll be organizing everything there as well.

Thanks very much for the great traffic! Seems there's a good amount of people following it and I do indeed hope that's the case. I like creating for Thump and I'm looking forward to keeping it going. Will return soon with the next chapter in the ongoing tale.
Posted by Charles Z at 1:57 AM 2 comments: