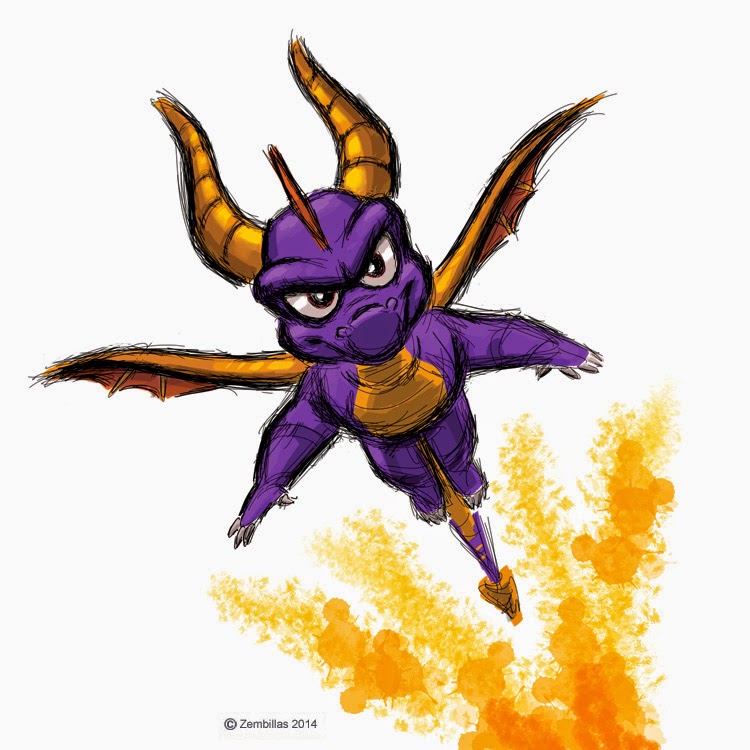 An amazing artwork! I grew up with Spyro and I still play it. It will always be one of my favorites. Spyro forever!

Super Spyro! Thanks for your comments everyone. I guess we're all Spyro maniacs.

Hi, where can I contact you Charles? I have private question for you..Thanks a lot!

Wow this is a really cool Spyro drawing, Charles! It shows that Spyro still has potential to return in his original form. Honestly I'm starting to think Spyro may come back in his own game because Ted Price said 'never say never' when asked about a new Spyro by Insomniac. Another major factor is the fact that Activision has re-opened Sierra Entertainment as an Indie-game label for lower-budget games, meaning if a developer wanted to do a new Spyro game with small production values, it would be under Sierra. And for the final fact, Insomniac is now doing indie titles starting with 'Slow-down bull,' a game where you play as a purple bull with anger issues.

Recently my cousin got rid of all his Skylanders figures and games. A 4th Skylanders came out without notice from the public or anything. I'm not implying people don't know about it because I still see the advertisements, but it's just not really popular because it's been done 3 times in a row. People seem to be getting tired of the whole Skylanders gig.

In other words it is nice to see you bring Spyro back to life. I don't predict anything but it's just what I see that's happening lately that could create possibilities of Spyro to return in Indie form.

Hello Sylar. I can be contacted through my school. Go to TheAnimationAcademy.com and use the contact link.

Hey Jacob. Spyro is a character whose potential has not been fully tapped yet. It would be great to see Insomniac pick him up again. I'll be looking to draw him more in days ahead.

Hello Charles it's me again!
I have a little question:
You are the designer of Spyro, so, Are you the designer of Gnasty Gnorc, Toasty, Doctor Shemp, Blowhard, Metalhead and Jacques too?

Hello Gribouille and thanks for your patience with my reply. I did Spyro and a few other dragon designs for the original game. I also worked on Nasty Gnorc and the sheep. After that the artists at Insomniac took over and did the rest of the characters.

Oh Ok!
I love the blue thieves,
and Gnasty Gnorc is Badass , but the Gnasty from "a Hero's tail" is Stupid...
In the last year I've made this :

and my brother made the 3d version: