Hey there folks. Heard about this a few weeks ago and wanted to let you know that a new book was published this past Tuesday on March 27 from Dark Horse Comics. It's called "The Crash Bandicoot Files: How Willy the Wombat Sparked Marsupial Mania". The publisher is Dark Horse Comics.

Well for those of you wondering what the original Crash production bible contained this looks to be it. You can purchase it at the Dark Horse Comics site or on Amazon. The front cover features some of my early sketches of Crash back when he was still called Willy. If I new back then that they'd be using these drawings and others for the cover of a book 23 years later I'd of done a better job. These images were just preliminary doodles. I didn't think in terms of a public presentation. Ya never know what can happen in time!

Here's the cover. Authored by Jason Rubin and Andy Gavin of Naughty Dog. Has a lot of Joe Pearson's art and also David Siller's work. 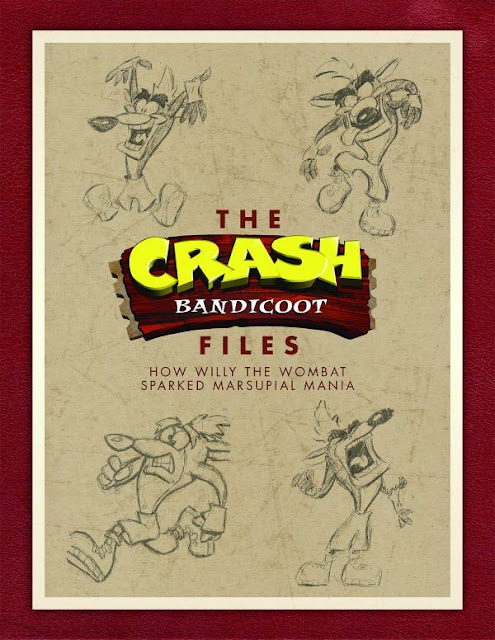 It’s been an awful long time since we caught up but I’ve recently picked up “The Crash Bandicoot Files” just a few days ago and I haven’t put it down since.

The art you and Joe Pearson made in this is phenomenal, each drawing is full of personality and charm. From Joe’s background layouts to your initial character sketches, it’s something that I think all fans can appreciate to see how Crash got his start.

It’s kinda unfortunate that the book didn’t cover anything for Crash 2 or 3 (I would’ve love to see more of your initial drawings for them) but maybe if this sells well enough, perhaps they’ll cover them later down the line I hope.

Hope you’re having a wonderful year so far!

Hello Pat! How are you? Glad you like the book. Haven't had a look yet but Joe Pearson's been in contact with Dark Horse and they're going to send us complimentary copies. So we'll see what's in it soon. My guess it's the contents of the original Willy the Wombat production bible from 1995. Fascinating how Crash keeps going on and on and now Spyro is being remastered. All good stuff!

I would love to pick this up, maybe I'll buy it one of these days.
with Dark Horse pubblishing this I have been thinking about merchandise we never got for Crash: Comic Books! Crash is a cartoon character, he was drawn first and then modeled in 3D, and his design really shows it, so why not produce a comic book series? Sonic had one for like 30 years or so, Mario has a long running series of manga, we need a Crash Bandicoot comic" Maybe you and Joe could work on the art and stories, that would be great! Since Joe is in contact with Dark Horse maybe he could propose the idea to them?

Hey there Gabriele! There was a Crash comic book and it was crazy. It was done in Japan. Very unusual! I saw it a long time ago at Naughty Dog. What they were doing with the characters especially with Crash and Cortex was ground breaking in a way. Too bad there never was a Crash comic over here. Also Joe Pearson created an animated opening for a cartoon series but it wasn't picked up. Too bad. The franchise could've been handled better by the licensing department at Universal. Anyway a comic book is a great idea and maybe someday we'll see something along those lines.

I saw both the manga and the opening that was supposed to be in the game also, but Sony pushed for the 3D route a lot.
A cartoon would be great too, Sonic has multiple comics and cartoons, and I would argue that Crash has a more interesting and fun world to work with, so why not give him a cartoon in this golden era of television and streaming services.

A lot of people who work in the area of character based franchises aren't necessarily the brightest bulb in the lamp. Sometimes they don't know what to do with what they've got. This can especially be the case in licensing. I'm happy to see that Crash has lasted as long as he has. It's the fans that have made the difference in his longevity. They wouldn't have remastered the games last year if not for the ongoing demand for content from the great Crash Bandicoot fan base. Case in point is the publication of this book.

Just purchased this for the art, have you any other art books of your work available for purchase

Hi Ashley Treacy. There's 2 books of my own I've authored. I have a third one in progress that's close to being finished. I have at least 6 more in various stages of development that I'm planning to publish.

Hey Charles, I studied game design and I made a model based on your concept art of Crash in early artwork, I hope you'll like this https://sketchfab.com/3d-models/crash-bandicoot-ed8c9f92c99c431dbb949ffce5f9dda3?fbclid=IwAR3-FOTiNzAHhXLQha_Jqg-N-hwe6Vmcd5J9zb0kMwVNBbjiI4iVPcpMc5A

Hello Daniel. Very good! You did a fine job with this. impressive! Thanks for posting the link. Enjoyed looking at what you did with Crash.