Did you know that in the original story of Dracula written by Bram Stoker in the 1880's the infamous vampire had a mustache? He had one to cover his fangs and he also loathed shaving. I was explaining this to my students the other night in class and thought I'd have some fun coming up with some stylized versions of the character as a demo so here they are. Ball point pen over blue line. 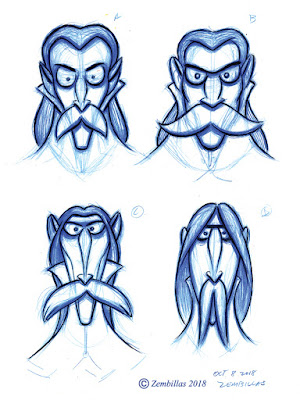 Hi Charles. I like the different variations on the design here. I didn't known that the original Dracula had facial hair. There been many versions character in different media's like films, show, comics and video games. have any favorite version of Dracula. Maybe you should do your own version of the character later on.

Hey there Hazman. Thanks for your comments. Dracula was in many ways very different in the novel than the way he's been portrayed in movies and media in general. I'm intrigued by the idea of depicting him as he was originally conceived. I may play around with a few more concepts. We'll see. In any case it's always fun to explore.

That's an interesting bit of trivia, I didn't know that. It makes perfect sense, if the fangs come out of the mouth you have to cover them up, even if they don't show when the mouth is closed when Dracula speakes thee can probably be seen.
Also nice Draculas :)

Thanks Gabriele. Yep it makes sense for a vampire to cover his fangs. Maybe someday we'll see a Dracula movie that is faithful to the original novel.

That's great! And shows a perfect example of Character Variation. Thank you �� I never knew Ol' Drac had a mustache ��

Danny Blade approach your work this way. Develop a variety of design concepts for a common theme and you'll be surprised what you come up with. Back it up with good draftsmanship and solid construction and you'll get very favorable results.