Sorry for the lapse in posting content the past couple of days. Things are picking up and I find myself busier than usual. It's all good I'm happy to say and I look forward to be getting back to the routine of daily blog entries again.

Here's somethings special for Crash fans. I found this recently along with a few other rarities which I'll be following up with in days ahead. These rotations of Crash Bandicoot and his sister Coco were created in 1998 I think. As I recall they were done as reference for Naughty Dog as they and Universal were preparing to make toys out of the Crash line. I did these drawings so the toy designers would have an idea as to how to model the characters. I don't think they've been published before. I'm pretty sure this may be another first in featuring never before seen art from the Crash. These are photocopies of the originals which were left with ND. 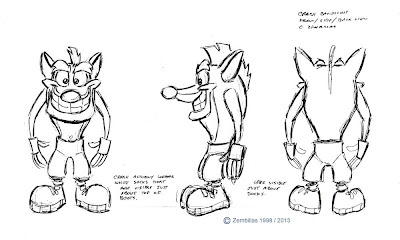 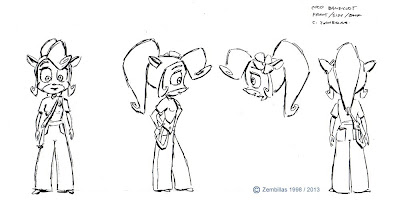 The toys are so awesome yet so fragile! I remember when I was like 8 years old I got some of them for my birthday. If I remember correctly I had Crash with jet pack, jetboard Crash, Cortex and N Tropy.

I now have a brand new Cortex and Coco still in their packaging.

Awesome! I wish the toys were like this. The designs were a little different and Crash in particular was a little strange.

Sorry if I haven't catch up on the news. I was busy planning my way to college and other future endeavors and its been nervewracking.

Anyways, I'm loving the recent art you put up of Crash, Coco, Tiny, etc... I also love this one you put up!

Hey Charles, would've been easier just to use the art piece of the Crash rotation when you sketched in 1995? Also, we're you involved in any other type of Crash media besides designing the games?

Good to see you around Pat. Good luck with everything you've got going on. I don't know why they didn't use the previous Crash rotation. I think the character's look had changed by this time and they needed something more recent. As far as Crash media goes, I wasn't involved in much of it other than design and character development.

I have a few Crash toys that came my way. Did I tell you guys the story of when I was hiking in the countryside and found a Crash video game? I think I did.