Looks like the He-Man and She-Ra community have discovered my blog. Here's something special to share with the Masters of the Universe fans.

It's the oldest existing image of He-Man in his classic pose from the original TV series in the 1980s. I drew this for practice early in production at Filmation Studios. I was learning at the time and not entirely used to designing in this style. I was striving to adapt and get better. It turned out very large. I drew it on oversized animation paper that would normally be used for backgrounds. Somehow the original was lost or maybe I gave it away. Fortunately I made a photocopy beforehand. I cut the central image out and taped it to another sheet of animation paper. That's why it looks the way that it does. Tried to color correct it as much as possible without affecting it too much. It's 30 years old and the paper has yellowed over time.

Hope you enjoy this all you great He-Man fans out there! 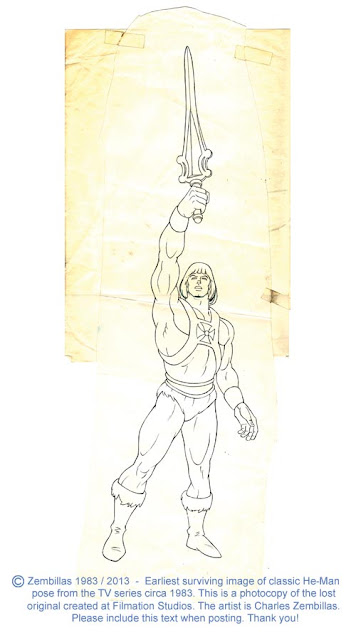 That's cool looking Charles! I HAVE THE POWER!!!

Say Charles, do you mind if the modifier of Crash Mania shares your thoughts on ND so we can add an in depth look on the history of Crash for the next update for the fansite? He wants to include every bit of you said that is if you're okay with it!

Sr., This piece is wonderful. And it's a huge luck that it was copied then! Another jewel preserved. Thank you!!

Thanks Emerson. I was confident you would appreciate it. Almost everything else in my possession is original art. This is one of the very few pieces that is a copy. At least the image has been saved for posterity.

Pat, as long as the positive things I related are included I don't have a problem using what I wrote. I really want to reiterate that while we were working together it was always fun. It was the aftermath that caused me to feel the way I did. The things that happened once the games were published. I hope that everyone will keep this in mind. I really enjoyed working with ND. There were many positives aspects to it. It's my disappointment in what happened later than eventually changed our relationship.

Charles, did you ever talked about it with Naughty Dog about all that?

Gabriele - The last communication I had with ND was about 11 years ago. Nothing since then.

Wonderful work, this is my daily inspiration before drawing really some icon stuff here!

Thanks Andres! Good to see you here! Hope all is well.