Follow this link to the Bring Back Bandicoot Petition

Here's a link to Bring Back Bandicoot on Facebook. 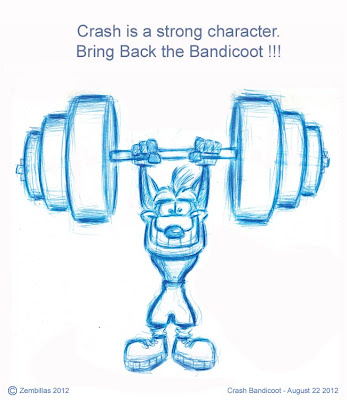 Awesome, Crash si so strong that no one want to work with him XD!
However In a discussion about Nitros Oxide you said that he wasn't in style with the other characters and the Crash Bandicoot idea. I want to ask you what make a character a Crash Bandicoot style character? What are the basical phisical characteristics?

Never underestimate the power of a mutant bandicoot.

In answer to your question Gabriele, some of the distinguishing aspects of character designs for Crash are exaggeration and simplicity. While the exaggeration is there for N Oxide, the look of the character starts to get complex. It doesn't quite fit in with what was happening with Crash at the time. I'm not saying that's good or bad either way. It's just how the character turned out. A different direction. There's also other intangible elements of design that can't quite be explained. It's a feeling that you get from observation.

Oh know I understand. I usually ceate some Crash Bandicoot characters, I wonder if those I create are in style with the other.
However thanks for the answer and for the picture ;)