An idea for Disney's Hercules 1997

In 1997 I was teaching at a friend's art school. It was really happening at the time as the animation industry was in a boom period. Lots of movies going on plus TV shows and everyone was trying to get into the biz. This was before the widespread advent of computer animation when hand drawn films were still the order of the day.

Around that time Disney's "Hercules" was in production. Maybe it was released by then. Being so close to the core of the industry it wasn't unusual for character designs to float around prior the film coming out. I remember being really disappointed in the way they made Hercules look. After seeing the movie I was even more turned off by the way they portrayed the character. So I took it upon myself to come up with my own version of what he could have looked like. I did this as a class demonstration in acrylics. Drew the sketch in pencil on watercolor board and then started mapping out color. Didn't finish it but had fun while it was in progress. 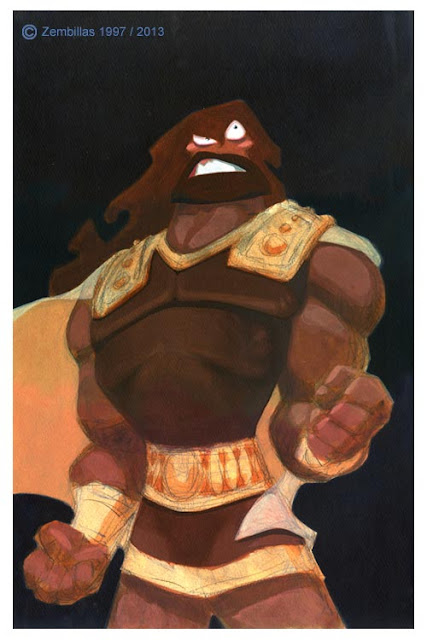 He is cooler than the movie version! Awesome job :D

Hey Charles, I like your version of Hercules better than the one Disney designed. Your's is more creative and stylized whereas Disney's is too curly looking (he has curls EVERYWHERE on his body!).

I can also agree with your opinion on the movie too. The movie is meh to be honest to compare to other Disney masterpieces. Herc had one too many pop culture references (i.e. Thebes is based off of NYC, carriages act as cars, etcetera. Much like how The Flintstones did it only Hanna-Barbera did it much better in my opinion). And the Gospel songs do get on my nerves too and the film reminds me of a Warner Brothers Cartoon wannabe. Even the Greeks didn't like it but I can say that I did like Phil the Fawn (voiced by Danny DeVito), I do have a knack for comedy relief characters.

Pat I agree. The Greeks didn't like it and neither did this one. That should tell you right there how much Disney missed the mark on the movie. It was a time of heavy corporate control over the creative aspects of the company. Usually they're the lamest judges of what works and what doesn't. Today it's John Lasseter that makes those decisions and he's been doing a much better job I'd say.

Hercules Video Game was pretty good for a disney game!

Man, comparing Scarfe's original concepts for Hercules and the final product is a little depressing. Everything was ridiculously toned down other than some of the monster designs. Mignola's concepts for Atlantis give the same sort of feeling.

That's what the Hollywood studio animation system tends to do. A lot of times they'll take the edge off of something powerful and unique. The decision makers are generally unsure of themselves so they water things down.

Hercules was a big disappointment for me. I was really looking forward to the film but wound up disinterested and uninspired right from the beginning of the movie.