Here's where I went with the halloween poster art I would create while at hallmark Cards in Kansas City in the early 1980's. By 1981 my painting skills had gotten good enough that this Frankenstein poster was marketed at their stores the next year in 1982. It had these word balloons at the bottom that you could punch out and place in a slot at the top of the poster. There was a blank balloon where someone could write their own remark. A the upper right you can see the sales tab. The art was painted in gouache. The price was $2.25. The poster is too big to scan so I took a photo. 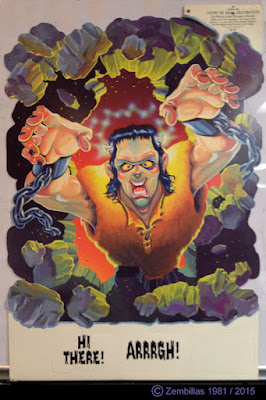 By 1982 I was really challenged with this poster below. The photo shop at Hallmark - which in those days involved cameras and film - set up a window pane with dramatic lighting. It was my responsibility to create a monster and make it look like he was coming through the window into your room. I worked from a small transparency to keep the colors keyed in and then had to mask out the areas where the window frame overlapped the monster and vice verse. It was very technical and I had to be extremely precise. The results were a huge success. It was marketed in 1983 I think for Halloween. This is also a photo of  original poster. 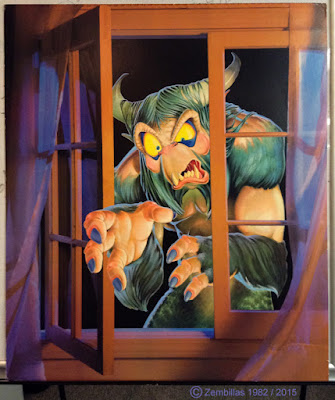 Around this time in 1982 I had been accepted into a training program at Disney Studios and made my way west to Burbank to start a career in animation. It was my last Halloween poster so I went out on a positive note.
Posted by Charles Z at 12:03 AM 5 comments:

It's a personal treat to rediscover this art. It's the layout for what was called a door-wall poster at Hallmark Cards in the earliest days of my professional career. It was printed around 1981 and sold at Hallmark Card shops all across the country. I'm pretty sure I drew it in 1980 the year before. It was my very first Halloween poster that went to market. The product was something like 7 feet long. It was the size of an actual door as a fake entry and of course it was in color. The floor mat at the bottom had "welcome" on it after it went to the lettering department.

Hello folks! Taking a little break from working on my character design book to share this ancient art with you. Digging through my archives last night I found the very first drawing I ever did in a professional situation. I was working at Hallmark Cards in Kansas City Missouri in 1980. I had just gone on staff and my first assignment was to contribute a concept design for a Halloween poster that several artists in the department were involved with. I imagined a fiddle playing scarecrow dancing around in a pumpkin patch with field mice framed by a rising moon beyond the horizon which is hard to see but it's there.

This is a copy of the original which Hallmark provided for my records at the time. It's yellowed from age but overall the image held up pretty well. 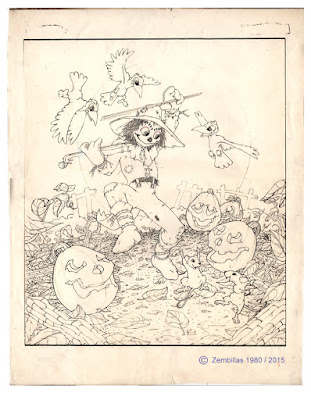 Howdy everyone and I hope things are going great for you. Checking in to see what's happening and I thank you for continuing to visit my blog. Even though I'm not posting much people are still coming around all the time to view posts and I appreciate the attention.

I've been dealing with daily life like all of us and doing what I can to clear time and make headway on the character design book I'm authoring. I've been able to muscle enough space here and there to layout around 220 pages and the count is still climbing with art and information.

Every moment that becomes available I work towards making progress on the book. So far it's looking good and I can say with a high degree of confidence that it could be the most comprehensive book on the principles of professional character design for animation ever published. I've checked out what's available on the market and there's nothing quite comparable. So we'll see how this winds up.

While I'm attending to the project I'd like to again express gratitude for your stopping by. The key to a happy life is in creativity so why not create and be happy.
Posted by Charles Z at 2:49 AM No comments: