This picture was a nice surprise which I'd like to share. Posted on The Animation Academy's Facebook page by Aaron Wood. It's a Christmas tree his family put together decorated with Crash and Spyro ornaments which are actually little toys they picked up on Ebay. What a cool tree! An appreciative thank you to Aaron Wood and his family from yours truly. Merry Christmas and Happy New Year! Clicking on the picture will give you a better view. 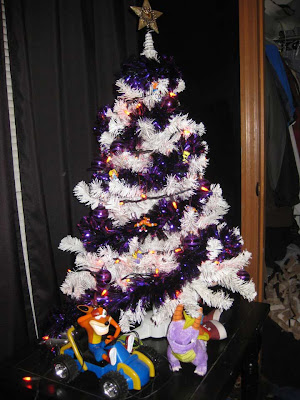 I know those miniature figures. I think they're cake toppers or something more on the lines like that.

Hey Charles, what did the building and interior of Universal Interactive Studios look like? From what I heard, it was on the backlot of Universal Studios.

Also, is this the building that you saw a view of the Hollywood Hills back in one of your comments, "Plus at that time ND was on the top floor of the main high rise office complex at Universal. I had a huge room with an incredible views of the Hollywood Hills to work in on the days that I would come in. It was great fun. Those were the best times."

Is this the building you were talking about:
http://upload.wikimedia.org/wikipedia/commons/6/60/10_Universal_City_Plaza.jpg

Yes, that's the building. That's the main office complex high rise at Universal Studios. ND was on the top floor. They had about half the floor I think. I worked in the corner conference room. Can't recall which corner as I look at the photo. That's where Crash 3 and CTR were produced.

ND started with a small bungalow close to Steven Speilberg's Amblin Entertainment and in the area where Alfred Hitchcock had his office. Could've been that bungalow, who knows.

Then ND moved to an office suite close by in a newer complex. That's where Willy the Wombat got under way. After the first Crash game ND moved to bigger space on the top office levels of Universal's main garage complex next to the Technicolor building. That's where they were doing Crash 2. Down the hall was Insomniac Games and that's where Spyro was going on.

After that is when ND moved to the very top of Universal Studios offices.

Kinda exhilarating hearing that ND started off near where Speilberg and Hitchcock worked! By the way, is the Technicolor building where they produced the sound effects for the games? Reason asking is that they did work for the Legend of Spyro and Crash Twinsanity. It's either them or I might be confusing it with Universal Sound Studios who did the games.

I don't know who handled the sound for the games while ND was with Universal. They certainly had the resources to back up anything they needed along those lines.

ND moved to Santa Monica after the fourth Crash game which I think was CTR. They wanted to prove they were all grown up and were looking for a relationship directly with Sony without Universal in between. They had a 3 game contract with Universal Interactive and did 4 games for them. When they moved to the Santa Monica location they got busy on what would be Jak and Daxter.

The problem with ND from the beginning was that when it came to developing original properties from scratch they couldn't chew gum and walk at the same time. Before Sony bought the company and headed into Uncharted territory ND was helpless in getting a new project going. That's why they hired Joe Pearson and myself for Crash and then me for J&D.

But once they were provided with concepts and a solid design direction they could do a bang up job on production. They were always very good at making their games work but extremely weak in development especially from inception.

Ah, now I get it. So ND basically jumped from building to building all over Universal City developing the games, talk about house hopping.

I guess Universal couldn't decide where to place their game development throughout the years, and it's obvious they carried the same trait when picking various studios making the Crash games such as Traveller's Tales, Vicarious Visions and Radical Entertainment.

Say Charles, what do you think of Spyro's latest reincarnation Skylanders?

Good Day, Mr. Zembillas. Sorry for my bad english, I am russian.
I really appreciate your dedication to Crash Bandicoot. During last year you have made a lot of great arts and shared with us many early unseen arts. Sincere thank you.
I just want to ask you about one thing but I can't find suitable words to it. I am one of the creators of russian Crash Bandicoot wiki that was called "N-циклопедия" http://ru.crashbandicoot.wikia.com/wiki/N-%D1%86%D0%B8%D0%BA%D0%BB%D0%BE%D0%BF%D0%B5%D0%B4%D0%B8%D1%8F. Can you help us to hot up Crash Bandicoot in Russia? Our wiki need for one artwork with lab assistants N. Brio, N. Tropy and N. Cortex on it. If you don't do it I will not be offended on you. Anyway, Thank You and Happy New Year from Russian Crash Bandicoot fans!

ND's moving around Universal was a move up at each step till they got to the top spot on the lot.

I like seeing Spyro active in the market. I think it's great and I really enjoy seeing the character. I don't mind that he's changed. That happens with characters over time. I'm partial to my own version of him of course. It's okay how others reinterpret the character.

I'll try to do something with those characters. Right now I'm very preoccupied with finishing art for a new project which is epic and monumental for me. I'm immersed in it and intent on completing this. It's the project that inspired the creation of Crash. Something very special. Whatever time I get I throw at this. Trying to get it to the point where it can be launched so be patient and I'll do my best.

Yep, that's an early action attitude pose from the days when the Willy design was finalized and I was trying to figure out how to make the character work. I came up with several of these.