I'm sure the Crash fans out there will be excited about this. Did some digging around today and guess what... Found artwork from the creation of Crash's sister Coco Bandicoot! There's a few drawings of her. Most of them are photocopies of the original art which Naughty Dog has in their possession as far as I know unless they gave them away to Sony executives as a present. They did that quite a bit with original development art. They'd frame the drawings and gave them away as presents to executives.

Coco was created as a counter balance to Tawna who was Bandicoot's  girlfriend. She came along because ND was sensitive to Sony Japan and wanted to please them. Sony Japan didn't feel comfortable with a super sexy character with Crash so ND went with a sister character instead to appease them.

So here she is on the day of her birth. These are the first few sketches. This is where she started from. There's more and I'll be posting those in a later entry. I wrote down the date on these pages when I drew them. March 18, 1997. I was developing Crash 2 at the time. 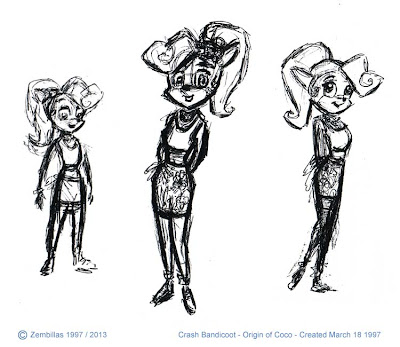 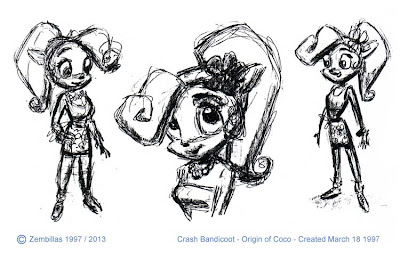 From what Jason Rubin told Crash Mania, he told us that Universal Interactive was very unpleased of the look of Tawna, I guess that's one of the factors why Tawna was on the chopping board.

And about that picture Gabriele posted a few days ago with that Crash poster at Vicarious Visions, I'm hoping this marks the return of Crash. After 4 years of nothing, I hope Crash comes strong and that the fanbase will come together and appreciate of what's to come.

She is basically the same Coco that appeared in the game with different clothes. It looks like you had more freedom in Crash 2 for the characters. Am I right?

I'm liking the floral design on Coco's skirt, especially since it compliments the game's exotic setting. Though I can see why you went with the overalls in the final design; they're much more practical in Crash Bandicoot's setting.

Just to remind everyone, Crash fan or not; Vicarious Visions has deleted the photo from their album on Facebook. This could raise some eyebrows and lead to speculation.

This is good news to hear! Oh happy day!

Thanks for your comments guys.

Pat, when it comes to ND what they say in public and what reality is can often be two different things. I don't know how Universal felt about Tawna. My imprression is that if they didn't like the character it would've been addressed in the first game. What I was told by Jason is that the Japanese wanted a safer character. One that didn't have strong sexual undertones. Thus a sister for Crash instead of a girlfriend.

Gabriele, that's right. She is basically the same character with different clothing in the final version.

Michael, I started out with tropical clothing and changed her outfit to suit how she functioned within the game and story structure.

Pat, it looks like there's creative activity going on with Crash. Whether it translates to the development of a new game is yet to be seen. At least artists are doing something with the character and as long as they are creating Crash he lives. I hope we'll see a new Crash game. Fans deserve it. You guys are a very dedicated group and there's lots of you the world over. It's only natural that Crash should continue.