First Drawings of the Creation of Spyro - January 14 1997

This month marks the 25th anniversary of when I first started working on the character that would become Spyro the Dragon for the original PlayStation video game console. Almost to the day. I was at Insomniac Games on the Universal Studios lot. It was January 14 1997.

By coincidence 2 days ago on January 14 2022 I dug up all of the original Spyro art which I own. There's 103 pages that I created for what was called "Project Pete" at the time.  This is the first publication of the very first page.

I created 16 pages of character designs on the first day of work. By the end of the second day Jan 15 1997 the count was 31 and I was tuning in to the character.

By day 3 Jan 16 1997 there were 38 pages and I had pretty much nailed the look of the little dragon that would become Spyro. On Jan 23 he was refined further and we had the final design. 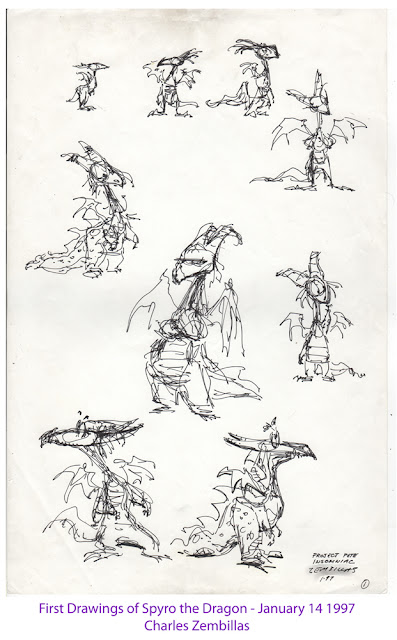 Email ThisBlogThis!Share to TwitterShare to FacebookShare to Pinterest
Labels: Spyro the Dragon